Voice over and film talents encounter all types of situations surrounding the ongoing stream of auditions. Do you ever feel your best is not needed because you are not the best or the first choice for a piece? That’s no excuse. Always give your finest. Even if you’re not the first choice, perform each voice-over script like the role was made just for you.

Did you see Ghostbusters? I watched a documentary the other day on the making of the original 1984 movie version. Of all the talented, big-name artists and performers in the movie, one artist’s journey still stands out for me. Writer/Actor Rick Moranis played “Louis Tully,” a neighbor of “Dana” played by Sigourney Weaver. Moranis was a last-minute fill-in for the Louis part. The role was written with Comedian/Actor John Candy in mind. Some of the film pre-shooting storyboards in the documentary even contained the Tully character with a striking resemblance to Candy. 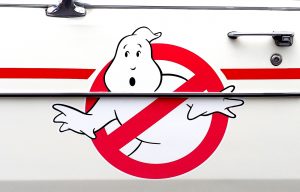 The narrator noted no other actor was considered because the movie’s producers assumed Candy would take the role. But, once Candy read the script, he turned it down. Needing a quick replacement, one of the producers thought of the much lesser-known Writer/Actor Rick Moranis. Moranis read the script and could not believe his luck. He quickly accepted the role. The role was so laid out for Candy that Moranis had to write most of his lines.

Moranis’ performance had audiences laughing nonstop with his business write-off party and offering the dog demon a Mike Bone (if he could find one).  Now that’s a full-service artist.

A voice actor (which Moranis occasionally works as), must be ready to make any role his or her own. The director will often give some parameters of a script. Some voice seekers even suggest characters to emulate when performing a voice-over script. But, it’s up to the voice actor to develop each script performance with the proper attitude and element of acting to bring the text to life.

Like film actors, a voice actor must be the talent and determine how best to perform a voice-over role. There is no time when a script is just a straight read. Even when the direction is to take a cue from a character actor, there’s usually room for a specific tone, feel personality, and confidence level in the performance. A voice-over artist is not hired to be a slough reading with a friendly voice. A voice over is engaged to be an actor using the medium of voice.

Always be your best actor

Like Moranis, you may or may not be the person in mind first, but with the proper script analysis infused with your style and creativity, you can rock your best performance.

Let your personality shine through as you listen carefully to the direction and give it your best routine. If possible, listen back to your performance and see if there is anything more you can pull out of the story for a better performance. Once you’ve given the director or producer what they initially asked for, do you see where you can pull more from the role? Who knows, the director may like your take on the script. If not, you can always go back to your first execution.

Get help in developing you

I am a big proponent of acting classes. Voice actors should always look for ways to bring out the creative stylist that lies in the soul.  As children, most of us made up characters, games, and played pretend adventures. That spirit of creativity still lies in our soul; acting and improv training will help bring out your best interpretation no matter how long it’s been since you were a child.

Be ready for that unexpected VO role

Voice acting is such a fun profession, and there will be times when you are chosen for a job because you bring something unique to a script, a believable performance. Take a cue from Moranis, be ready not just to be the voice over, but the best actor for that script.

You know what to do, break that lip!

A couple of days ago, I had the opportunity to meet with a group of voice actor friends.  My elite group of FaffCon friends and I have been virtually meeting very nearly monthly for several years.  (FaffCon was developed by Amy Snively and is one of the first content laden, voice-over events specifically geared to helping voice-over talent become successful through collaboration.)  While time and life have changed us all, we are very happy to still be working voice over talents.  Hearing of my friends’ successes and optimistic hope for the future really uplifted my spirits.  While human relationships can be work, they are the best way to fuel your creativity and hope for the future.

The meeting with my friends reminded me of how important it is to focus on the good things in life. Where I live, the airways are constantly bombarded with negative rhetoric and news.  After hearing hours of negative comments, death reports, and predictions of doom from an irradiated planet, taking time to interact with the right set of friends is just what I needed.

Choose to associate with positive people who like you for the person you are, who encourage you to be yourself, and be the best you can be.”  The Napoleon Hill Foundation

An Ear for the Positive

We all want to be successful, so pay it forward.  Take time to listen as others speak, especially a friend telling of success, and be happy for them.  We all have times of success and failure.  It’s a part of the human experience.  Hanging out with the right friends and business associates can make all the difference in the world. For more on this, see my blog “How I Get my Voice-over Help.”

This week’s meeting (like many) with my FaffCon VO friends felt like a cozy warm hug from a friend that I hadn’t seen in some time.  Of course, not all relationships and interactions are always cozy and warm, co don’t give up on doing the hard work of building healthy relationships.  Through healthy relationships, you become a much better voice actor and person overall as you learn, grow, forgive, appreciate, and do it all over again.  You’ll truly see how building positive relationships can help in the down times and fuel your creativity even in the recording booth.

Now, with all this optimism, it’s time to break a lip.